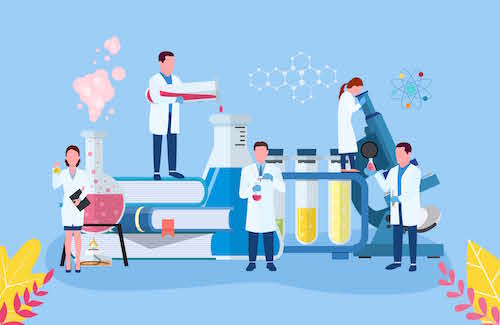 We already know that stigma plays a role in preventing people from getting the care they need. One in five Americans experienced a mental health condition in 2018, but only four in ten received treatment. But even for those who do receive treatment, stigma also prevents better care due to the lack of mental illness research compared to research for other medical conditions. Due to this, the progress of innovation for better mental illness medications has been slow.

A person just diagnosed with depression would receive similar care to a person who received care for depression two decades ago. Drug manufacturers have scaled back research in psychiatry, and without the appropriate funding, neuroscientists have struggled to reinvigorate investment.

So how do we facilitate the fundamental research needed to improve treatment for mental illness?

First, we need to be able to do the science that will lead to the discovery of therapeutic targets. Therapeutic targets represent specific molecules within the body or brain that are associated with an illness or set of symptoms and can be positively affected by certain drugs. In the case of cancer, solid funding of the basic processes of cell growth led to discovery of a cascade of druggable molecules associated with specific cancers, leading to improved treatment options. We need to do the same for mental illness.

The place to start is by increasing funding for neuroscience. All biomedical research is underfunded, but especially neuroscience research considering the societal impact of mental illness. We need to do a better job of discovering molecular pathways that may lead to new medications.

To reinvigorate innovation, we will also need to incentivize the private sector to restore programs to develop psychiatric medications. The American Brain Coalition has been discussing this effort through its Innovation Initiative.

Expanding Our Understanding of Medication

Neuroscientists and psychiatrists alike need to focus their mindset toward understanding drugs used to treat psychiatric disorders. For example, an example of a common drug target for depression is the serotonin transporter. The most commonly used medications for that target are selective serotonin reuptake inhibitors (SSRIs). How we understand these medications is that they bind to serotonin transporters and inhibit serotonin reuptake. However, that process happens within hours, while these drugs take approximately two months to work. This suggests the therapeutic process is more complex than the textbook description of SSRIs’ effects on the brain.

Similarly, when researchers tested how newer antipsychotic drugs affect the brain, they found that they affected more than a dozen neurotransmitter receptors which were not always the intended targets of the drugs. Additionally, it wasn’t even clear whether the drugs were activating or inhibiting the various receptors, making it even harder to determine the overall effect of the drug.

The truth is that the actual therapeutic targets of these agents could be different than those intended, and may reveal themselves slowly during the course of treatment. Given that even psychedelics hold promise as effective therapeutics, the term “expanding one’s mind” is particularly apt for both researchers and clinicians.

We also need to identify biomarkers associated with psychiatric diseases — ideally in easily accessible sources like blood or blood cells. How better to combat stigma than to say to a person skeptical of their diagnosis, “sure, it’s in your head, but it’s also in your blood.”

Identifying blood biomarkers for specific psychiatric illnesses will not only combat stigma, but point the way toward personalized treatment strategies. For example, about one third of those treated for depression do not achieve remission, even after several series of drug treatments. Since it takes 8-12 weeks to determine whether a patient is responding to a given treatment, a blood biomarker that reflects depression status could preview results, avoiding weeks of trial and error.

Biomarkers could personalize treatment and aid in drug development. Unfortunately, this critical step forward will most likely not happen without support for increasing publicly-funded biomedical research in the neurosciences.

Mark M. Rasenick, Ph.D. is Distinguished UIC Professor of Physiology and Psychiatry and Director of the Biomedical Neuroscience Training Program at the U. Illinois College of Medicine and a Career Research Scientist at the Jesse Brown VAMC. His research on G protein signaling and on the neurobiology of depression is funded by the NIH, VA and other sources. He served as a Robert Wood Johnson Health Policy Fellow on the staff of the late Senator Edward M. Kennedy and is currently Secretary and Advocacy Chair of the American Brain Coalition. He is a founder of Pax Neuroscience, a company aimed at developing biomarkers and personalized medicine for depression.

Shop with Amazon Smile. Select Alliance for the Mentally Ill of Greenville when prompted to choose a charity, then shop like you normally would! 0.5% of your purchase will go to NAMI Greenville.
NAMI Greenville Update on COVID-19 (3/16/20)