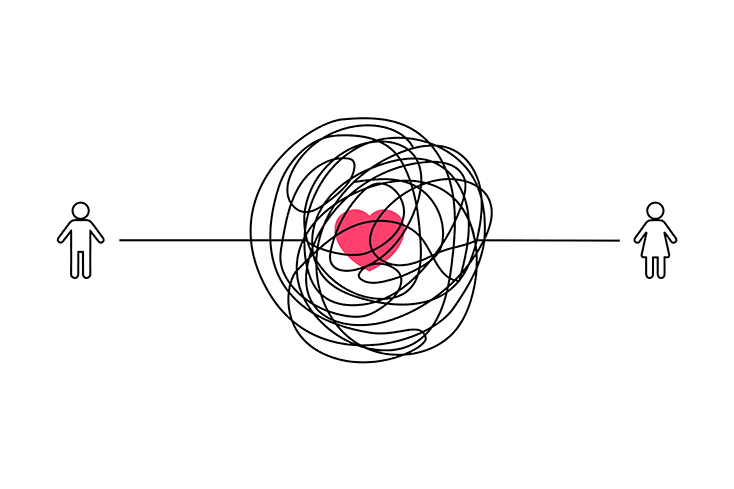 It was the middle of the afternoon when I broke my porcelain ramen bowl. It slipped out of my hands and the thing shattered. I was in tears sitting on the kitchen floor, collecting each piece to throw in the garbage bin.

The accident happened when I was washing the bowl. I was about to grab the dish towel from the stove and the slippery porcelain fell out of my fingers. I’ve been clumsier the past few years because I have been on a medication with that side effect (along with significant weight gain). The clumsiness has been a source of frustration for me often, like the time I broke down in tears one night because I dropped my car keys under the driver’s seat.

So, what does one do when they break their favorite bowl? Well, I texted a few people lamenting the loss. One text was to a man I’d had a romantic relationship with for the previous nine months. Despite being thousands of miles apart most of the time, we kept up consistent phone communication. As per usual, I hopefully imagined what our future would be like. We’d marry, have babies and live happily ever after.

I texted him to tell him I broke my bowl: “Ughhhhhh, I broke my porcelain ramen bowl.”

He teased me for having a “first-world problem” and asked how I broke it.

I said it slipped from my hands. My medication makes me clumsy.

He asked me what medication I was on again. (We had discussed in passing once that I took medication to treat my anxiety.)

Zyprexa, I told him. And I explained the side effects.

I proceeded to hesitantly tell him that it was an atypical antipsychotic, that I had been on it for four and a half years, and this was the drug that provided the most benefit to me with the least bit of side effects. For me, I was relieved in part that I finally had an opportunity to talk about this topic with him. My mental health is an important challenge that I’ve had to overcome, and it’s something I wanted to share with my partner.

He texted back that he found it very alarming. That this was a huge red flag. He did not know if he could date someone who was on a drug like that. He said that fresh air, exercise and a daily routine were all I needed. He also said he would never take a drug like that.

I flashed back to my last serious relationship with a man who criticized me for taking medication. I actually stopped taking them to please him. Things got bad, and I ended up in the hospital. This was now the second romantic relationship where I’ve had to confront the stigma of mental illness. And honestly, it roused a sense of fear inside me that I might never find love.

When I asked him why it was such a huge red flag to him, he said, “It’s called an antipsychotic. If that’s not a red flag, I don’t know what is.”

I can’t say I blame him for it. Antipsychotic does sound kind of scary.

He said he had to shower and that we’d talk later. I waited three hours for a call.

When he didn’t call, I sent a message: “Did you want to talk tonight?”

His response was radio silence.

He didn’t even want or care to understand this aspect of my life. It was especially frustrating because I felt like I was patient with him through the trials of a long-distance relationship and some of his own character flaws.

The next day, I wanted to have a salad for lunch. In place of my porcelain ramen bowl, I reached to the top shelf in my kitchen and pulled down the stack of mixing bowls. As I reached, suddenly they all came toppling down; the biggest mixing bowl of the group broke into multiple pieces.

I found myself on the kitchen floor, in tears, again. I was picking up the shards of the plastic mixing bowl. Two bowls in the span of 24 hours. The first brought about a huge let down. But the second helped me gain clarity on this relationship. This individual was not making the effort to understand my mental illness and the many ways it has impacted my life — from being hospitalized to crying over a broken bowl.

I realized why having this conversation about my mental health in a relationship is important to me. I can’t change who I am or the challenges I’ve had to face. What I can do is choose who and what to accept into my life to make it an environment where I want to live and even thrive. I want to find somebody who can support me through the challenges I’ll face ahead.

I still have hope I’ll meet that person. The broken bowls showed me that my heart is soft enough to break over a porcelain ramen bowl. And when it comes to love, a soft heart is all you really need.

Jennifer B. is a writer who enjoys taking complex topics and simplifying them. She is earning a Master’s degree in science writing. She values self-care, positive affirmations and her overall wellbeing.

Shop with Amazon Smile. Select Alliance for the Mentally Ill of Greenville when prompted to choose a charity, then shop like you normally would! 0.5% of your purchase will go to NAMI Greenville.
My Emotions During My Husband’s Bipolar Episodes

A Word to the Wise: Caregiver Take Care
Scroll to top