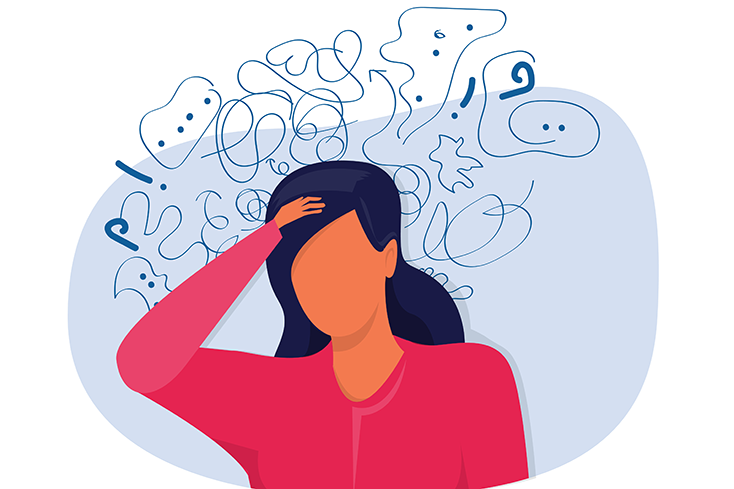 As an individual with bipolar I disorder, I experience paranoid delusions during manic episodes. Although medication reduces these symptoms, there have been times when my medication was not the appropriate dosage, or I refused to take it at all. This led to times when my delusions and false beliefs led me to engage in high-risk behavior.

Through intensive therapy spanning more than 15 years, I learned to recognize my delusional thinking. However, I still struggle to come to terms with my past beliefs, having what one psychiatrist once described as “fixed delusions.”

In an attempt the make sense of past events and to shift my perceptions to a healthier way of thinking, I began cartooning. Creating images has become a form of “reality testing” for me, a practice that I learned in group therapy.

Reality testing, as my therapist has explained it to me, is the practice of weighing the evidence to support or deny my irrational beliefs. My illustrations depict both my perception of reality during past psychiatric episodes and the logical explanation for events that occurred during these times.

I had my first psychiatric hospitalization in June 2007. In the months leading up to my hospitalization, I was depressed and becoming increasingly paranoid. When my uncle died by suicide, I became convinced that he was murdered by my friends. I furiously journaled my fears and suspicions. My writing became increasingly fragmented and incoherent. I believed that federal agents were interrogating me telepathically. I wrote about what I perceived was evidence for their investigation into my uncle’s murder.

Then one day, voices in my head told me that I needed to wait on the curb in front of my apartment building so the FBI could bring me into witness protection. According to my voices, I was considered a witness, not a suspect, so they couldn’t approach me lest it appear that I was coerced. I believed that I was to wait on the curb for 10 minutes before a car would approach to rescue me. In reality, I waited most of the day and night until my neighbors finally called 911 to get me psychiatric help.

The following cartoon depicts my feelings of desperation that day. 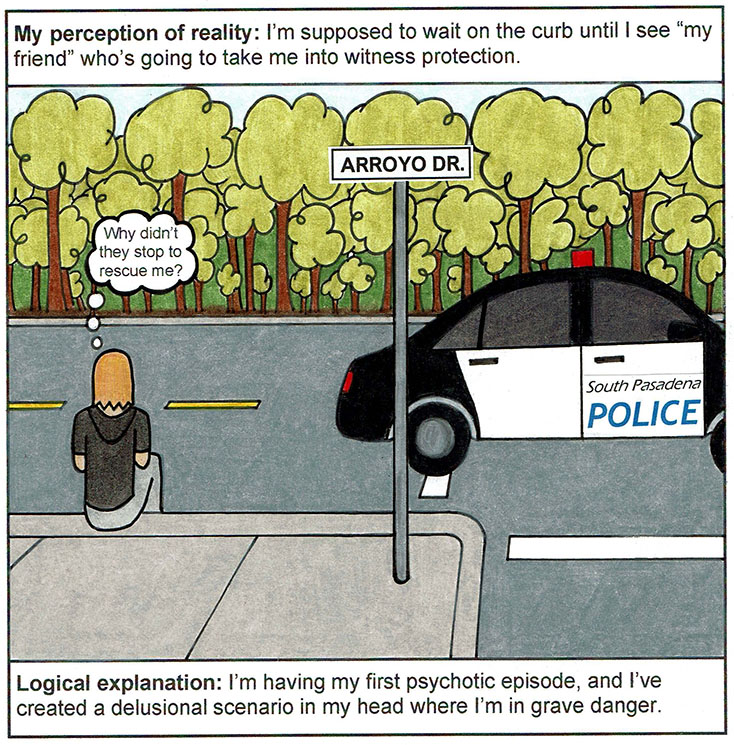 The paramedics took me to the hospital where I was placed on an involuntary psychiatric hold. The doctor diagnosed me with depression with psychotic features and prescribed me an anti-depressant and anti-psychotic medication. Since then, I’ve been given several diagnoses, including schizophrenia, schizoaffective and bipolar I disorder.

Doctors have prescribed me countless different medications to stabilize me. At times, I refused to take my medication, believing that the doctors used it to control my thoughts and actions. As illustrated below, this led to involuntary hospitalizations and the threat of court ordered injections. 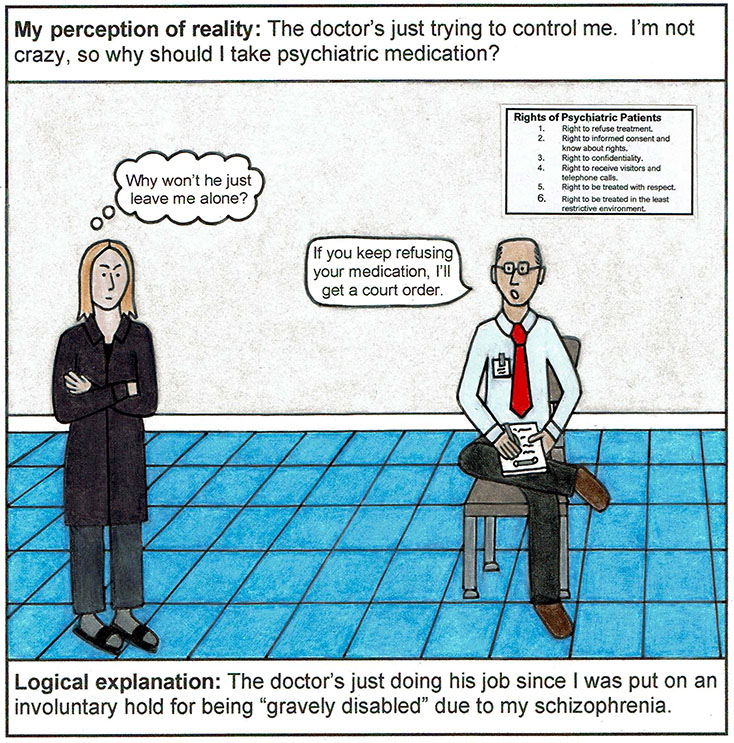 After another psychiatric hospitalization in May 2013, I decided that I needed my medication to function. I took it as prescribed for several years and remained stable. However, in 2019, my psychiatrist gradually reduced my antipsychotic medication because I was concerned with the weight gain that I attributed to taking it. When I was on the minimum dosage in November of that year, my psychotic symptoms returned.

I began to have conversations in my head again where I believed that I was communicating telepathically to testify in a federal case. These voices ordered me to wander the streets in my bare feet so I could escape from people who were trying to murder me in my apartment. At one point, the voices told me to approach men in the park to ask them where my nieces were. I believed that they were kidnapped (they were actually safe at home). 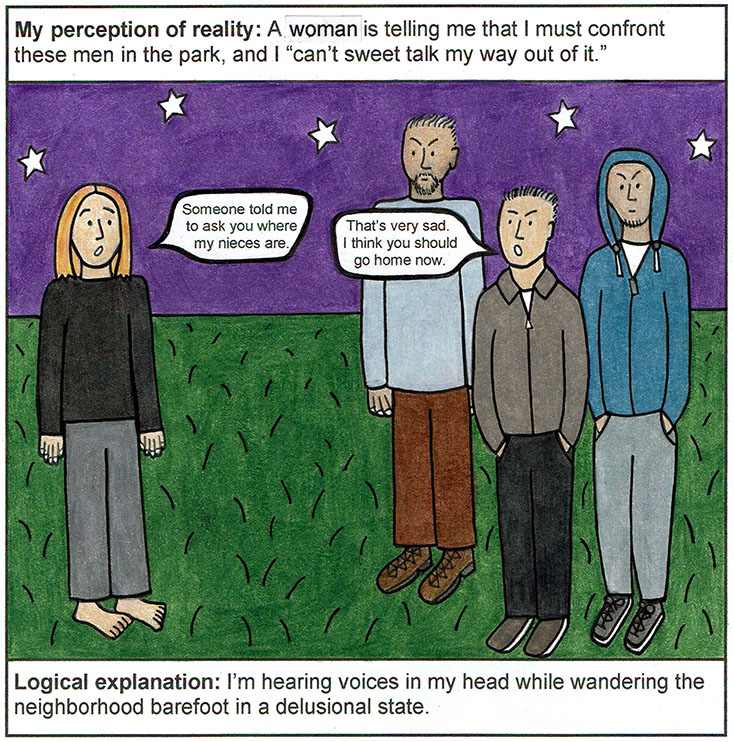 This psychiatric episode ended with me going to the roof of my building because the voice in my head ordered me to. I got locked out of the building and was on the roof for about 24 hours. I was cold, scared and confused. I had visual hallucinations for the first time in my life. I saw giant images of former presidents and fire on the hills in the distance. Voices were telling me to jump off my building to die for my country. I bargained with the voices and told them that I’d overdose when I returned to my apartment.

Suddenly, I was able to open the roof door and enter my building. Once I was finally able to get back into my apartment, I decided to get a ride to the hospital to voluntarily admit myself to get the help that I needed. Had I not made that decision, I don’t know if I’d still be alive.

Using This Creative Outlet To Make Sense Of My Experiences

Since these episodes, I’ve experienced a long period of stability. My medications effectively treat my psychotic symptoms and depression. However, I don’t always have clarity when I reflect upon the circumstances surrounding my previous psychotic episodes. I have a difficult time determining what was real. I struggle to let go of the delusional thinking that has dominated my thoughts for 14 years.

My art has helped with this tremendously. It’s a way for me to see my experiences from a different perspective. It’s through my art, and my commitment to receiving treatment, that I have made progress in discerning reality from delusions in my life, gained a better understanding of my mental illness, and embraced a healthier way of thinking and living.

Lesley Paige grew up in the Washington D.C. area and now lives in Los Angeles. She is a former teacher who devotes her time to her art, writing and receiving treatment for her mental illness. Lesley hopes to share her art and experiences to connect with others who have similar struggles.

Shop with Amazon Smile. Select Alliance for the Mentally Ill of Greenville when prompted to choose a charity, then shop like you normally would! 0.5% of your purchase will go to NAMI Greenville.
How to Prioritize Self-Care During the HolidaysTaking the Leap of Faith to Healthy Self-Esteem
Scroll to top