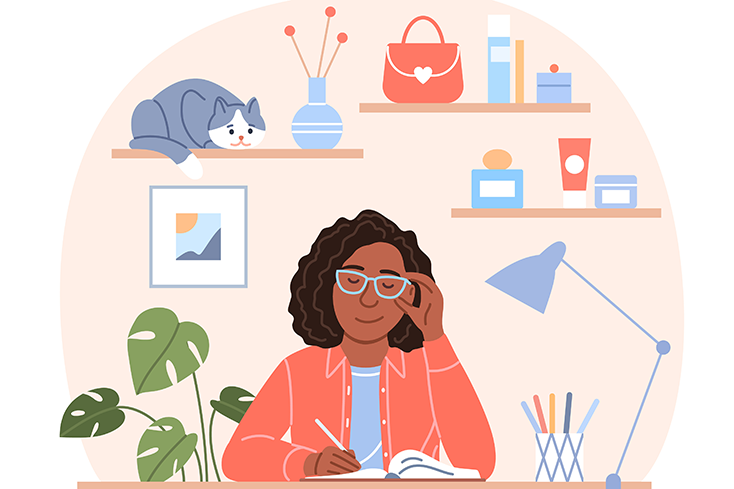 Simply put, I’ve been through some stuff. I’ve faced childhood trauma, the sudden loss of a parent and a lifelong battle with bipolar disorder. Through these challenges, writing about my experience has helped me cope. It kept me grounded when I felt like the world was upside-down. Instead of bottling up emotions, I’ve logged them, which has been cathartic and freeing. In addition to treatment and self-care, journaling has helped me navigate through the toughest times.

I Became Familiar With Mental Illness In Childhood

My dad struggled with bipolar disorder. He was often depressed and distant. While he lived in the same house with me and my mom, he was never truly present. He’d lock himself in his bedroom for days, then explode in angry outbursts. I was left confused, wounded and yearning for his affection. I felt unloved. Trying to make sense of my dad’s volatility, I often blamed myself. I thought if I could just be the perfect daughter, then he’d love me. I felt broken and needy.

I would go on to suffer from unexplainable mood swings of my own. I was frenetic and unbalanced. My mind would race a mile a minute. I jumped between jobs, apartments, relationships and even sexual identities. By the time I was in my twenties, I was delusional and hearing voices.

Writing Helped Me Forgive My Father

In 1998, when I was 24, my dad lost his battle with bipolar disorder and died by suicide. I felt abandoned. His death triggered my first major depressive episode, and I was diagnosed with bipolar disorder as well. My heart sank. There was no denying it: I had the same mental illness that took my dad from me. A bipolar diagnosis suddenly felt like a death sentence.

With the help of my mom (who’s a psychotherapist) and my treatment team, I learned as much as I could about bipolar disorder. I read self-help books voraciously, educating myself on mania and depression. My therapist suggested I write down my thoughts and feelings, so I started journaling. I released my fear, frustration, anger and sadness until my hand hurt from writing. I filled six notebooks with stories from my life, and I began seeing them with new eyes. I recognized many of my dad’s (and my own) behaviors as symptoms of bipolar disorder.

Eventually, I came to terms with my diagnosis, which helped me understand my dad for the first time. We had the same mood disorder but with different faces. My bipolar disorder made me hyperactive and reckless. My dad’s illness made him disconnected and sullen. When I realized how powerful and consuming mental illness could be, I understood that my dad’s erratic hostility was no more his fault than it was mine. My writing journey helped me forgive my dad for all the times he’d hurt me.

When I Gave Up Writing, I Realized How Crucial It Had Been

I moved on with my life, convinced I was “fixed.” I put my journals away, assuming I no longer needed them. However, despite all my newfound insight, I hadn’t fully addressed my “daddy issues” from childhood. Once I stopped writing, I forgot to listen to my inner voice. I lost touch with myself, and because of that I kept choosing the wrong men as romantic partners.

When I was 35, I met a guy who paid more attention to me than any man ever had. In the beginning of our relationship, he doted on me. I’d never felt so special. Because I desperately needed validation from men, I failed to notice that he was also becoming controlling as time went on. But by then it was too late; I was hooked. And I married him.

By the time I was 38, my marriage had become downright abusive. I spiraled down into a severe bipolar depression and attempted to end my own life. Luckily, I survived. I was admitted to an inpatient mental institution and, once discharged, I promised myself I’d never go back. I’d made the same mistake my dad had, but I had a second chance at life. I vowed not to squander it.

Writing Helped Me Piece My Life Back Together

I bought new notebooks and started journaling again. I felt like I was reconnecting with an old friend who I hadn’t seen in ages. I poured out feelings of worthlessness, examining my sense of self and my daddy issues. Writing helped me finally face my demons. I began a journey of recovery by finally coming to terms with who I was and reconciling it with who I wanted to become.

Writing my story down helped me confront the trauma I’d endured. My past was a learning experience that made me resilient. Journaling gave me the strength to leave my husband and put myself back together. I emerged from a long, dark tunnel that seemed at times to have no light at the end.

Over the years, I kept writing. Originally, it was purely therapeutic — not meant for anyone but me to read. But one day, I realized that my story might inspire hope for others who were struggling like I had. By 2018, I’d written so much that I had a book on my hands. I’d turned the pain of my past into a huge accomplishment I could be proud of. “Daddy Issues: A Memoir” was published in 2021.

Carrie Cantwell dedicates herself to mental health advocacy and suicide prevention. She’s a writer for several national mental health publications, and she started a blog to share her journey.

Shop with Amazon Smile. Select Alliance for the Mentally Ill of Greenville when prompted to choose a charity, then shop like you normally would! 0.5% of your purchase will go to NAMI Greenville.
Adopting a Cat Helped Me Find RecoveryThe Importance of Finding Acceptance on My Mental Health Journey
Scroll to top