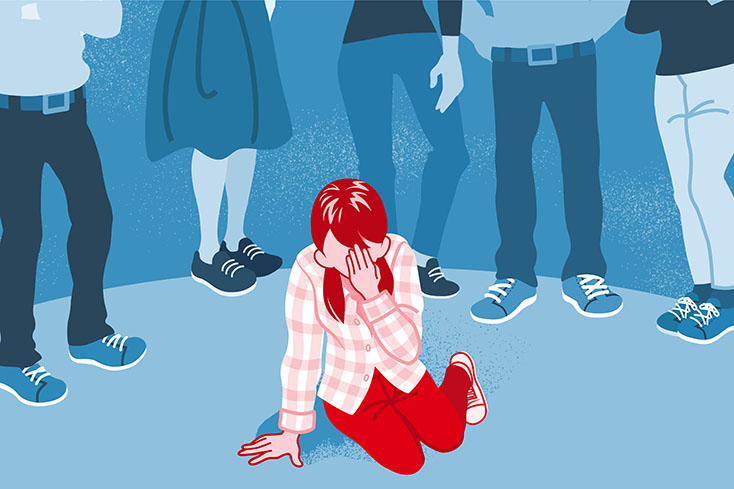 In 2019, when I was 35 years old, I was raising a two-year-old son and a four-year-old daughter while battling severe depression, anxiety and an eating disorder. I couldn’t cope with the stress I was under and began abusing my anxiety medication. My symptoms eventually escalated to suicidal thoughts. I needed help, to say the least, and was hospitalized for six weeks.

After my hospital stay, which included talk therapy, medication changes and ECT (electroconvulsive therapy) treatments, I returned home hoping for the best. I was fortunate to have a strong support system of family friends, but I still felt so alone and embarrassed.

One morning after my return home, I read that fashion icon Kate Spade had died by suicide. One of the many articles about her passing claimed that she had battled depression silently because she didn’t want to speak out and hurt her brand.

As I read those words, tears fell down my cheeks and something inside of me just broke. That article could have easily been describing me.

Recognizing The Impact Of Stigma

After reading the article about Kate Spade’s death, I was outraged. My generation was taught to keep quiet about mental illness. Many of us were told to “keep your chin up” when we were struggling; the less fortunate were told to “suck it up” and be strong. Some were even told that mental illness isn’t real.

It’s no wonder I ended up where I did. I was suffering with so much pain, and I thought I was weak. I felt scared to share what was going on, and — since nobody else was talking about depression or anxiety — I just assumed I was alone.

But I’m not. In 2017, an estimated 11 million Americans adults had one major depressive episode with severe impairment and about 40 million Americans have generalized anxiety disorder. These are common illnesses, whether we acknowledge them or not.

At that moment, I decided I was done being silent.

I started writing about my journey. When I was navigating my mental health symptoms, I didn’t have guidance on how to approach my health and recovery, so I hoped to be that guide for others. In my writing, I admitted to being hospitalized, abusing medications, self-harming, experiencing suicidal ideation and having an eating disorder.

My thoughts and feelings poured out of me, and for the first time in my entire life, I felt free.

This writing, which became a blog dedicated to eradicating the stigma of mental illness, had an immediate impact. Readers reached out to me to thank me for speaking up or to share that they lived with mental illness, too.

Several of my family members even admitted to facing the same problems, which was eye-opening. Hearing this from family made me feel more “normal” — like my experience wasn’t just a fluke, but perhaps a genetic trait. Ultimately, it helped me to realize that I did nothing wrong.

Soon after sharing my story and hearing back from my audience, the heavy weight I was carrying was lightened.

Helping Others Know They’re Not Alone

Over the last few years, I’ve learned that mental health is just as important as physical health. Now it’s my mission to speak openly, and without the fear of judgment, about depression and other mental health conditions. There is no reason to combat these issues alone, and it can even be deadly to do so. And I plan to keep talking until everyone has access to quality mental health care.

It’s ok to talk about your struggles. It’s ok to have a mental health condition. It’s ok to be scared. But it’s important to know that you are not alone in these struggles or your fears.

My name is Heather. I have major depressive disorder, generalized anxiety disorder, avoidant personality disorder and binge eating disorder. I experience suicidal thoughts. Sometimes, I struggle to get out of bed. I take medication every day.

But I am not ashamed. I am not weak. I am not my disease. I’m free.

And you can be, too.

If you are struggling with a mental health, reach out to your doctor. If you have suicidal thoughts, go to the nearest emergency room or call the National Suicide Prevention Lifeline at 1-800-273-8255 to speak with a trained crisis counselor 24/7 or text NAMI to 741-741 to connect with a trained crisis counselor to receive free, 24/7 crisis support via text message. You can also contact the NAMI HelpLine by calling 800-950-NAMI (6264) or emailing info@nami.org for information and resources.

Heather Loeb is a writer and the creator of the Unruly Neurons Blog. She also writes a mental health column for the Corpus Christi Caller-Times. Her goal is to eradicate the stigma surrounding mental health by writing about her journey with depression, anxiety, eating disorders and suicidal ideation.

Shop with Amazon Smile. Select Alliance for the Mentally Ill of Greenville when prompted to choose a charity, then shop like you normally would! 0.5% of your purchase will go to NAMI Greenville.
Healing After My Son’s SuicideAre You Really Treatment Resistant?
Scroll to top