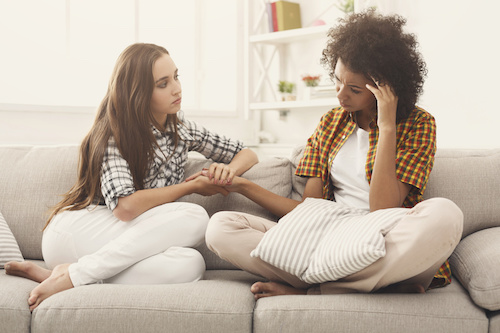 I remember the first time I asked a client if they were having thoughts of suicide. I was scared. It felt intrusive. And somewhere in the back of my mind, I didn’t really want to know. I wasn’t sure if I could respond well if the answer was “yes,” and I was worried that I might even make the situation worse.

And this was after years of training, supervision and experience.

Whether we’re parents, teachers, counselors, coworkers, friends or family members, humans have been conditioned to be afraid of conversations about suicide. That fear runs deep. But that fear is getting in the way of our ability to make a difference for people during their most difficult days.

After I lost my brother to suicide in 2004, I made a commitment to learn more about suicide—especially how to talk openly about it. So, 14 years of paying attention to thought leaders, researchers and people who have lived through their own suicide crises have helped me amass some of the best practices for having conversations about suicide. I hope they help you too, should you ever need them.

TIPS ON STARTING THE CONVERSATION

Lean in. The only real way to know is to ask. If you observe behaviors or signs that worry you, ask. The worst thing that will happen if you’re incorrect is that you may feel a bit embarrassed. Suicidal thoughts are often significant red flags that something is wrong; varying degrees of intensity are common for people going through hard times. When you feel your “Spidey senses” tingle or you wonder, “Should I be worried?”—lean in. Ask.

Know your resources. Be familiar with the support resources you have in your community. Some examples might be a school counseling center, an employee assistance program, a local community mental health agency, or national crisis support resources like the National Suicide Prevention Lifeline or the Crisis Text Line. Walk into this conversation as a well-informed referral source.

Get comfortable feeling uncomfortable. For most people, asking about suicide is anxiety provoking—and that makes sense. Talking about life and death is intense. Notice and acknowledge your feelings, and do your best to get centered before you start the conversation. Your physical and emotional presence will have a big impact on how the conversation goes. So, take some deep breaths and focus your heart on compassion.

Create a safe space. Find a place for privacy and comfort. Depending on the situation, this may mean taking a walk outside or finding a quiet place to sit down. Take cues from the person about physical proximity and intensity of eye contact. Some people prefer to talk shoulder-to-shoulder, others face-to- face. If you’re sitting, make sure that your body language communicates openness and interest and that you’re seated on a parallel level with the person you’re talking to. Take time to turn off your phone and close the door as well, so you won’t be interrupted.

Practice active listening. Refrain from problem-solving and advice-giving. Instead, show them that they are being heard. Use minimal encouragers like nodding your head, and saying, “uh huh” and “and then what happened” to keep the conversation going.

TIPS ON ASKING THE SUICIDE QUESTION

Frame the question in empathy and compassion.“You know, sometimes when people are going through what you’re going through, they find themselves in unimaginable pain. Thoughts like, ‘I wish I could go to bed and not wake up in the morning’ enter their mind because their pain has exceeded their ability to cope.”

Assume that suicide is “on the menu.”Because suicidal thoughts are common for people who feel overwhelmed, you can say something like, “Sometimes when emotional pain is so intense, people think about suicide. I’m wondering how many times suicide might have crossed your mind, even if just fleeting in nature.”

Use direct language. Using the word“suicide” in a direct way says, “We can talk about this here.” It’s important to use the direct language of “suicide” rather than “hurting yourself,” because these are different questions.

TIPS ON WHAT TO DO AFTER ASKING THE QUESTION

If the answer is “no”: Notice any nonverbal cues. If they’re defensive and can’t keep eye contact, chances are something else is going on behind these behaviors. In these cases, try pointing out the discrepancy and say, “You’re telling me you’re fine, but you seem unable to make eye contact with me. Can you help me understand this?” In these cases, you may need to persist by asking the question in different ways.

If the “no” really is a “no,” people will likely express gratitude that you cared enough to reach out and will continue to talk about their troubles.

If the response is not clear:Sometimes people will respond with a question like, “What do you think?” or they’ll say something like, “No, not really.” Sometimes they won’t answer the question at all and will just launch into another story. In these situations, the answer is usually “yes.” Again, point this out: “When I asked you a direct question about suicide, you said XYZ, so am I correct to assume suicide is on your mind? I can appreciate the many reasons you might be hesitant to share this with me, but I’m hoping we can be as open as possible right now, so I can help you.”

If the answer is “yes”: The first words out of your mouth should be, “Thank you.” Express gratitude for the trust they have in you and for how they value your relationship. The second thing you should say is a sentiment of partnership—something like, “I’m on your team, and we’ll figure this out together. I do not want you to die.” The third thing to say is an offering of hope: “I have some things we can check out. If we helped you feel less miserable, my guess is you would no longer consider suicide. So let’s work on that together.”

Build in choice, and take action in the moment. Many people who experience suicidal thoughts feel like they have lost control of their own lives. Suicide feels like something they could have control over. To help them reclaim a sense of self-agency, it’s important to build in choice points. For example, ask if they want to call the National Suicide Prevention Lifeline or the Crisis Text Line. Ask if they want to lead the conversation with the counselor on the other end, or if they want you to.

However, if they disclosed a plan of how they might die by suicide, it is imperative to have a mental health professional decide what the next steps should be. Say, “Suicide is too big of an issue for me to handle alone. I need help helping you. I’d like to refer you to a medical professional, who is trained and has access to additional resources.”

Follow up. Sometimes it’s a plan for coffee or lunch. Sometimes it’s a walk in a nearby park or a trip to the beach. Sometimes it’s a simple phone call or an extra stop to their place on your way home from work. No matter what it looks like, make a specific plan for follow-up by saying something like, “I’m going to reach out tomorrow to see how you’re doing.” Following up can make a world of difference, regardless of how the conversation went.

These are just some suggestions on how to handle the difficult and lifesaving effort of having a conversation about suicide. And these tips are just the beginning. I suggest that everyone over the age of 15 complete one of the following suicide-prevention gatekeeper trainings:
• Question, Persuade, Refer (QPR)
• safeTALK
• ASIST
• Working Minds

By investing in these skills and trainings, you can let a struggling individual know they are seen, they are cared for and they matter. There are many good reasons why people don’t feel comfortable disclosing their suicidal thoughts, but there aren’t any good reasons why we shouldn’t try to reach out anyway.

Don’t wait for the “perfect moment” to ask about suicide; that moment will never come. Ask anyway. Because suicide is too important to keep secret.

Sally Spencer-Thomas, Psy.D. is a clinical psychologist, inspirational international speaker and impact entrepreneur. Dr. Spencer-Thomas was moved to work in suicide prevention after her younger brother, a Denver entrepreneur, died of suicide after a difficult battle with bipolar condition. Connect with Sally at SallySpencerThomas.com.

Note: This article was originally published in the Winter 2018 issue of Advocate.

Shop with Amazon Smile. Select Alliance for the Mentally Ill of Greenville when prompted to choose a charity, then shop like you normally would! 0.5% of your purchase will go to NAMI Greenville.
For The Heart Cries

No One Should Be Blamed for Suicide
Scroll to top