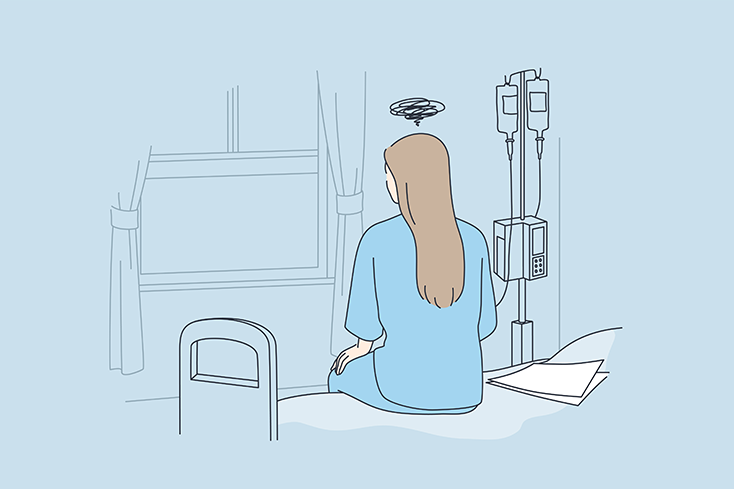 When you have mental illness, you’re more than likely to encounter some form of discrimination, from social stigma and exclusion to a lack of legal protections. Thankfully, as the mental health community raises awareness and challenges stigma, the larger conversation is beginning to address the discrimination that people with mental illness experience.

There is one form of discrimination, however, that rarely makes the conversation: A form of medical discrimination called “diagnostic overshadowing.”

Diagnostic overshadowing, as defined by the experts, is a “process by which physical symptoms are misattributed to mental illness.” While research and personal accounts from patients suggest that there is a connection between mental and physical health, the assumption that two are always related, and that physical symptoms must be psychosomatic, is a dangerous approach.

Research shows that people with mental illness die prematurely and have significantly higher medical co-morbidity, as compared to the general population. Unsurprisingly to those of us with mental health conditions, diagnostic overshadowing is believed to be one of the factors contributing to this phenomenon.

My own experience seeking medical care with multiple mental illness diagnoses, including borderline personality disorder (BPD), has underscored the negative consequences of diagnostic overshadowing. Simply having psychotropic medications listed on my medical chart is enough to trigger doctors’ suspicion about my credibility as a patient.

My First Experience With Diagnostic Overshadowing

In 2015, I began having episodes of crushing chest pain. After emergency room doctors ruled out a heart attack, I followed up with a cardiologist from the medical group where my primary care physician worked.

I had only been in the exam room for five minutes before he told me that my chest pain was due to anxiety. I walked out of his office in tears. I knew this pain was not anxiety; I’d experienced anxiety and debilitating panic attacks before, and this pain was much worse.

I vowed to get a second opinion, so I found a cardiologist who oversaw a women’s medical center associated with a major hospital in New York City. She asked questions the other cardiologist didn’t bother to ask. She was interested in the fact that I was over 40 years old and that I had been diagnosed with both migraines and Raynaud’s Syndrome.

This doctor ultimately diagnosed me with Prinzmetal’s Angina, an uncommon form of the decreased blood flow to the heart. She prescribed me a calcium channel blocker, and the frequency and severity of the attacks dropped significantly.

I called my primary care physician to inform her I’d sought a second opinion for my chest pain. I told her that the chest pain was not due to anxiety, but rather a result of Prinzmetal’s Angina. She said simply, “Thank you for letting me know.”

I don’t know what I expected, but I felt disappointed by her response.

In 2017, I began feeling frequently nauseated and experiencing stomach pain. A gastroenterologist told me I had functional abdominal pain syndrome (FAPS), and I would simply have to “learn to live with it.”

When I went home and googled this disorder, I came across a paper on the syndrome which described the condition as a “somatization disorder.” In other words, my mental and emotional state was leading to the pain I was experiencing. I was simultaneously furious about it and resigned to being dismissed by medical professionals.

I lived with the pain and nausea for months, and I began unintentionally losing weight, which then triggered my anorexia. I hadn’t restricted my food intake since 2012, and I started to enjoy the feeling of seeing the numbers on the scale drop when I weighed myself.

Eventually, I sought a female gastroenterologist at the women’s medical center where I’d had success with the cardiologist. She took me seriously, and put me through a series of tests, including an endoscopy, but they were all negative. I continued to lose weight and dropped almost 20 pounds in just a few months. Finally, the GI administered a breath test and it determined I had small intestinal bacterial overgrowth.

I sent a message to the doctor who originally dismissed my symptoms as psychosomatic, and he wrote back, “Thanks for letting me know.”

I swallowed my anger, convinced that this ordeal could have been avoided if he had taken me seriously when I first saw him. It took me over a year to gain the weight back and even longer to confront the emotional toll of having my eating disorder triggered.

I Still Have Hope For The Future

I still take medications for my mental illness diagnosis (two antidepressants and a second-generation antipsychotic, that works as an adjunct to my antidepressants). However, I sometimes find myself tempted to leave them off the list of medications I provide to practitioners. I worry about how disclosing my medication regimen may influence the way a doctor views me. I almost never reveal I have BPD because of the stigma associated with that diagnosis.

While this experience is frustrating, there is hope. Eventually, I found compassionate doctors who saw me as a whole person and patient — doctors who could treat me effectively. I currently see a headache specialist for severe and chronic migraines. She is caring and smart (she has a Ph.D. as well as an M.D.) and she’s board certified in neurology and psychiatry.

After seeing her for about five years, I felt comfortable enough to reveal that, in addition to anorexia and depression, I’d also been diagnosed with BPD.

She didn’t hesitate. “You are awesome.”

Andrea Rosenhaft is a licensed clinical social worker in the New York City area. She is recovered from anorexia, major depression and borderline personality disorder (BPD), and she frequently blogs on the topic of mental health and recovery. Andrea is the founder of a mental health advocacy and awareness organization called BWellBStrong, which focuses its efforts on BPD, eating disorders and major depressive disorder. She lives in Westchester, N.Y., with her rescue dog, Shelby.

Shop with Amazon Smile. Select Alliance for the Mentally Ill of Greenville when prompted to choose a charity, then shop like you normally would! 0.5% of your purchase will go to NAMI Greenville.
Overcoming Condition-Specific Barriers: Facing AnosognosiaHow I Dealt with Mental Health Discrimination in the Church
Scroll to top