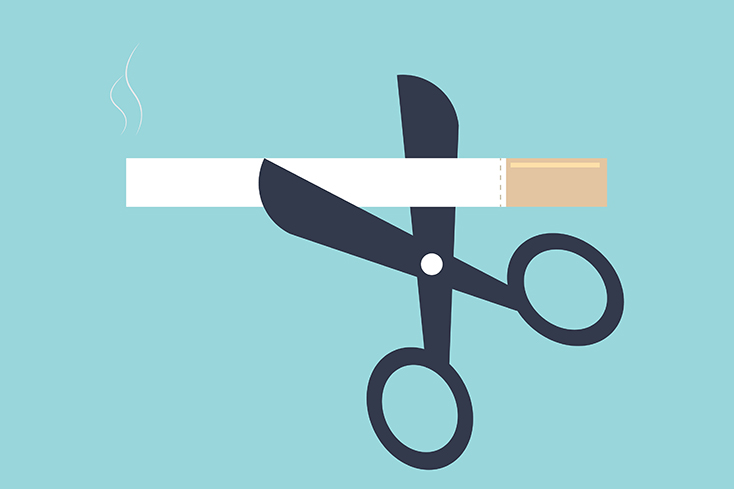 Much progress has been made to reduce the use of tobacco in the United States. However, people with mental illness continue to smoke cigarettes at a higher rate than the general population and experience significant negative health impacts.

[Dr. Crawford:] Rates of smoking are higher for individuals living with mental illness than for the general population. Based on your years of experience, what factors do you think have contributed to this difference?

[Dr. Evins:] I think there are a number of things that have contributed. Historically, inpatient units and residential services offered cigarettes to people with serious mental illness, and many of the patients as well as staff would smoke within that environment. We know that our environments are really important in how much we smoke. The other factor that is not discussed as much is that people with serious mental illness are less likely to be offered effective smoking cessation treatments when compared to the general population.

Why is it the case that people with serious mental illness are not offered those options?

There is also a myth that quitting smoking worsens psychiatric symptoms in addition to side effects related to the medicines that help people quit. One wonderful meta-analysis from the McNeill’s research group in the UK shows that stopping smoking significantly improves depressive symptoms and anxiety. In fact, the effect sizes are the same as taking an antidepressant.

One other point I’d like to make is that primary care physicians tend to wait for people who smoke to ask for help to quit. However, there are new clinical practice guidelines which recommend that doctors offer a smoking cessation medication to every smoker.

It’s so important to know that there are tools, including medications, that are available to help people with serious mental illness to quit. Another area of concern for people is relapse after quitting. What can you tell us about that?

Based on my clinical experience working at the Massachusetts General Hospital Freedom Trail Clinic, and several studies, we actually saw a lot of success. Almost half of people would quit with the help of medication.

But after stopping medication, relapse is a real issue. It’s a problem for every smoker, but for smokers with serious mental illness, it often happens quickly — even within two weeks. In one study, we treated 250 smokers with bipolar disorder or schizophrenia with open label Varenicline (Chantix) and weekly group therapy. And we did pretty well; about 44% of people quit. At 12 weeks, when it is generally recommended to stop treatment, we randomized all those quitters to either stay on medicine for the remainder of the year or go on placebo and to keep attending to groups. The ones who went on placebo relapsed quickly, with an average of 35 days to relapse. Those who stayed on Varenicline for a year had an average of 358 days before relapse.

That’s a huge difference! Can you tell me more about the available medication options, and about concerns that the medicine may worsen a psychiatric condition?

In conjunction with the FDA, we conducted the largest trial ever done for smoking cessation in the world. We enrolled 4,000 smokers who didn’t have any psychiatric illness and 4,000 smokers who did have a psychiatric illness. About 2,400 had unipolar or bipolar depression, 700 had an anxiety disorder, and almost 500 had schizophrenia or schizoaffective disorder. Our goal was to estimate the likelihood of having some kind of moderate to severe neuropsychiatric adverse events, like feeling hostile or feeling depressed, feeling suicidal or hearing voices. What we found was that if you had a psychiatric illness, you had about a 6% chance of having a transient psychiatric side effect and the risk for developing a side effect does not differ by what type of medicine you take.

What resources are available for individuals living with serious mental illness who want to quit smoking?

I recommend that people first talk to their medical provider about using a medication to quit smoking. Two years ago, the American College of Cardiology released recommendations which clearly stated that every single smoker be offered behavioral support and prescribed medication, such as Varenicline (Chantix), bupropion or nicotine replacement therapy (nicotine patch, gum, lozenge, inhaler or nasal spray). Based on previous studies, we know that the rates of developing neuropsychiatric side effects are relatively low with these treatments.

What advice do you have for individuals who would like to quit smoking and quit using other substances?

I would recommend for those folks to start treatment, including treatment for smoking cessation. It can be quite overwhelming for people, but flexibility is important. It is okay to start a medication to help reduce the number of cigarettes you smoke. It’s okay to quit in one month or over the course of three months, and you don’t have to quit all substances at the same time. We know that being in treatment for smoking cessation can increase your confidence to quit other substances and can increase success from staying away from all substances.

Dr. Christine Crawford is the Associate Medical Director for NAMI and an adult, child and adolescent psychiatrist at Boston University School of Medicine, where she is also an Assistant Professor within the Department of Psychiatry.

To hear more from Dr. Evins, visit our Ask the Expert webinar archive to view a recording or download the transcript of her presentation from 11/5/2020.

Shop with Amazon Smile. Select Alliance for the Mentally Ill of Greenville when prompted to choose a charity, then shop like you normally would! 0.5% of your purchase will go to NAMI Greenville.
A Word to the Wise: Caregiver Take Care